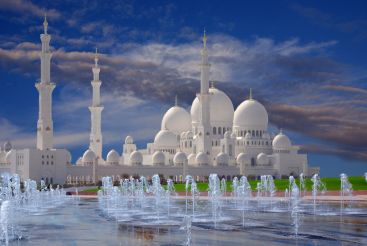 There is an old legend about the origin of Abu Dhabi. As the saying goes, the city was founded on the place pointed by a gazelle. Hunting for a gazelle, people found themselves on an island near Persian Gulf. That’s how they discovered new source of fresh water. As a thank-you for water, people left the gazelle alive and founded a new settlement at that place. In Arabic, Abu Dhabi means “father of a gazelle”.

Today, Abu Dhabi is a great megalopolis and a capital of the United Arab Emirates. This contemporary and beautiful city has been rapidly growing and developing since oil deposits were found in its surroundings in the mid of the 20th century.

The Arab capital abounds in attractions, among which Sheikh Zayed Grand Mosque is of particular interest. It is one of the six biggest mosques in the world. It was erected in 2007 and named after Sheikh Zayed bin Sultan Al-Nahyan, a founder of the United Arab Emirates. A distinctive feature of the mosque is its free entry not only for Moslem, but also for people of other confessions.

The exterior of the mosque and its interior decoration create the atmosphere of an oriental fairy-tale. The mosque is designed in Moroccan style with elements of traditional Turkish style. You’ll be impressed with its immensity of unbelievable luxury and wealth. Here you can see the 80 domes lined with white marble. Outside the mosque, one may count over a thousand columns covered with handmade marble panels, decorated with lapis lazuli, red agate, amethyst, and pearls. The walls of the mosque are artfully embellished with magnificent golden mosaics. In the four corners of the mosque, hundred-meter minarets are towering.

There is an old legend about the appearance of Abu Dhabi. She says that the city was founded in the place to which the hunters pointed gazelle. In pursuit of his prey, people were on the island near the Persian Gulf, where gazelle led them to a source of fresh water. Out of gratitude for the water people have given the animal life and founded on this spot a new settlement. Abu Dhabi in Arabic language means - the "father of gazelle".

In our time, Abu Dhabi is the largest metropolis and the capital of the United Arab Emirates. This modern and beautiful city began to develop rapidly after the mid-20th century in the vicinity of the discovery of oil.

Among the many beauties of the capital allocated Arab Sheikh Zayed Mosque - one of the six largest mosques in the world. It was built in 2007 and named in honor of the founder of the United Arab Emirates, Sheikh Zayed bin Sultan Al Nahyan. Feature of the mosque is that it allowed access to people of all faiths, not just Muslims.

The appearance of the mosque and its interior decoration dipped in the atmosphere of this oriental fantasy. The design of the mosque is made ​​in the Moroccan and traditional Turkish style. The scale is amazing incredible luxury and wealth. Here you can see the 80 domes, lined with white marble. Outside built more than a thousand columns, which are covered with marble panels handmade, decorated with lapis lazuli, red agate, amethyst and pearls. The walls of the mosque artfully embellished the magnificent golden mosaics. In the four corners of the mosque minarets towering hundred-meter.

Its main prayer hall is decorated with the world's largest handmade carpet, which had been worked 1,200 people over the past two years. And what about the chandelier under the main dome of the mosque, decorated with gold and Swarovski stones, which has been included in the Guinness Book of Records as the largest chandelier in the world. The building of the mosque surrounded by man-made canals and lakes, and the courtyard area of 17,000 square meters of paved with colored mosaics. The total area of the building of the mosque is more than 22 thousand square meters, its walls are at the same time praying about forty thousand believers.

It is impossible to imagine in what amounts to cost the Arab state grand mosque. The project involved the best designers used the most expensive natural materials. The beauty of the mosque is incomparable with any structure in the world, which is why it is not only a cult object of the United Arab Emirates, but also a very popular tourist attraction in the modern Islamic world. The mosque is open to all visitors every day except Friday. Admire the beauty of the Zayed Mosque, which is the pride and heritage of the Emirate of Abu Dhabi, absolutely free. There are regular guided tours. Women at the entrance to the mosque issue special clothing in accordance with the Muslim faith.

By Sheikh Zayed Mosque convenient to get to the main station of Abu Dhabi by bus or taxi. From the bus stop, you have to walk to the mosque for about ten minutes.