The biggest "flower miracle" in the world is now in Dubai 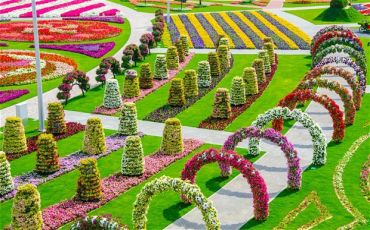 Eyes the real vast ocean of flowers - more than 45 million plants, 45 species, dozens of colors and shades, awesome track - the original "flower" artwork, paint illuminations. It is the largest park in the world of flowers, which appeared in Dubai , the largest city of the United Arab Emirates .

Multicolor real oasis «Dubai Miracle Garden» blossomed in the place where yesterday was a desert. An area of over 70,000 square meters, guests pyramids, paintings and installations of various kinds of flowers. Highlights petunia, geranium, marigold, Coleus, lobelia and several other ornamental deciduous and flowering plants. It is noteworthy that many of the flowers planted for the first time brought and planted in the UAE. Park deservedly preparing to fill the Guinness World Records. After all, nowhere in the world do not have such a large flower clock, a ten-flower pyramids area of 140 square meters. meters and the park surrounding this "living fence" height of three meters. Hard to come by and very beautiful, made ​​from fresh flowers, portraits of the founder of the country, "father of the nation" Sheikh Zayed bin Sultan Al Nahyan. A surround him seven huge hearts who act symbols of the seven emirates that comprise the United Arab Emirates federal state.

Impressive original landscape design in the creation of which was attended by experts from the U.S. and Europe. Four kilometers aside for footpaths allow visitors to consider in detail the numerous park attractions. Applies interesting irrigation technology - underground drip irrigation that saves water and energy. Luxury garden appeared efforts of hundreds of engineers, florists, technicians. Part of plant seeds brought from the U.S., Germany , Italy , Japan . Dubai is considered one of the hottest cities in the world. However, modern technology allows the color to grow even in arid climate of the desert.

Park in Dubai will be on service of tourists throughout the year, will be closed only during the summer months when the temperature reaches 35 degrees or more. Tickets cost five dollars and a half for children under three years free. The organizers expect that annual audience of park visitors will be at least one million people.

Dubai is known worldwide as a modern city, a business center and a resort that can offer a holiday for every taste: the best hotels, modern architectural masterpieces, oriental hospitality, beautiful beaches, shopping, skyscrapers of glass ... Just around the corner and the world famous new park - a "miracle in the desert."

Date: 18 September 2013
Building 1200 premium hotels
According to estimates of professionals now in construction and design is more than 1,000 hotels worldwide. Thus all of them belong to the highest category.
Feedback